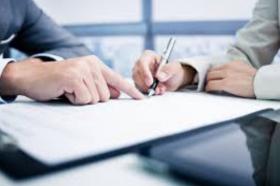 Usually there will be a £5 charge for:

1. witnessing documents for you; or

A person under 18 years old may not be able to enter into binding legal relationships (other than for life-essentials).

A signature can by any mark by the person signing (“signer”); it can be their customary mark they always make, usually a stylised version of their name, or any other indication they intend to agree the document. An “X”-mark has traditionally been sufficient signature of an illiterate person (rather oddly, since the cross symbol customarily indicates disapproval compared to a tick symbol of approval). Peculiar marks are apt to cause issues, however, so are best avoided if possible.

It is a statutory requirement that a witness must be physically present with the signer when the signer either:

1. Actually signs the document, or

Video calls or other virtual methods that do not include actual physical presence are, therefore, not normally satisfactory for witnessing.

There are debatable circumstances – such as where the witnessing occurs through glass; this would best be avoided - but the general rule is that the witness must be able clearly to see the signer when they signed, or confirmed their mark (by definition a confirmation would mean the witness could also hear the confirmer).

The witness being able to see the signer is essential because the witness is, mainly, confirming the signer’s mark against the appearance of the person whom that witness actually saw signing etc. Accordingly, a witness must possess proper eyesight, the area be sufficiently illuminated, clear from fog etc.

A witness does, however, certify that:

1. The signer was not under any direct physical ‘duress’ at the time the witness witnessed them, meaning the person signing was not, at the moment the witness signed, being physically forced to sign, e.g. by the threat of immediate violence should they fail to do so (“a gun to the head”), or by their hand being actually forced. Note, however, that ‘duress’ does not include mental “undue influence” or pressure or sign – only physical force or threat. Sometimes the duress issue means seeking to witness the parties separately to the presence of any other parties.

2. The signor apparently had mental capacity to sign – in short, that the signer appeared to be able to understand that their signature had some significant legal consequence [though they might be unclear on precisely what the consequences might be].

These requirements infer that the witness themselves has to have sufficient mental capacity to discern such matters [regardless of whether the witness is aware of their role in doing so].

A witness to a document should not be a party to that document – such a witnessing would be legally invalid – i.e. the document would be deemed not to be witnessed at all. The legal effects of that could be complicated.

It is invariable legal practice also to avoid the use as witnesses of any person who is:

2. closely related either to the signer or any other party to the document, e.g. not cousins, aunts & uncles or closer; or

3. living at the same address as the person whose signature is being witnessed; or

4. in some kind of close social or business relationship with the person whose signature is being witnessed

Although such witnessing would not be technically legally invalid, many instructions, e.g. lenders, will actually require an independent adult witness.

We will normally witness at our offices immediately we are asked during office hours – it normally only takes a few minutes.

If you need a particular person to witness, e.g. a solicitor, then you might be best to telephone before arriving to check their actual availability.

We will charge a small £5 fee for witnessing documents for you, or providing a solicitor-certified copy of a single page document (see Certified copy Power of Attorney for certified copy LPA’s).